About Sightseeing
The leaders of the world’s seven biggest democratic economies are meeting in Cornwall, England, and it’s putting the Southwest region of the country under a spotlight.
Maybe you’ve heard of ‘bleisure’ travel? It’s about tacking on a leisure vacation to a business trip. We’re not sure if the leaders of the Western World have the time for a little independent fun and exploration during their packed schedules in Cornwall, but here’s what our friends at Visit Britain suggest they – and you – do on a visit.

Coastal Cornwall’s claim to fame (other than things labelled ‘Cornish’, like Cornish hens and Cornish pasties/ meat pies) are related to its dramatic, seaside location: over 300 sandy beaches, coastal villages and resorts, dramatic cliffs and wild moors.
It’s an ideal scenario for outdoor, fresh air activities like hiking, cycling and even surfing that draws surfers and kitesurfers from around the world when the surf’s up.
Take a walk along the newly-opened English Coast Path, which, at 2,795 miles (4,500 km) is
the longest managed and waymarked coastal trail in the world. (Yes, in case you were wondering, it’s longer than other famous long-distance trails like the 2190 mile Appalachian Trail and the 2600 mile Pacific Crest Trail in the U.S.)
The view alone will get your blood racing. Cornwall has 12 “Areas of Outstanding Natural Beauty” from the dramatic cliffs of the North Coast to the beautifully bleak hills of Bodmin Moor.

It’s the closest you might come to a ‘real life’ dinosaur habitat. Cornwall’s “Jurassic Coast” is an UNESCO World Heritage Site and THE place to go fossil hunting with the dinosaur lovers in your family.
The Jurassic Coast begins in Devon and continues for 95 miles (150 km) to Old Harry Rocks in Dorset. The rock cliffs at Charmouth and Lyme Regis contain thousands of fossils of animals that swam in the Jurassic seas, and each year fossils are eroded from the cliffs and tumble onto the beaches waiting to be discovered.
If you’ve seen the film Ammonite, starring Kate Winslet, it is set in Lyme Regis and tells the story of amateur fossil collector Mary Anning. She and her brother were the first to discover a complete Ichthyosaur skeleton and a complete Plesiosuar. Some of her fossils are at London’s Natural History Museum. Fossil fans can find out more about Anning’s life at the Lyme Regis Museum. The Museum of Jurassic Marine Life is home to some of the first fossils found. The famous Weymouth Bay pliosaur is on exhibition at the Dorset County Museum. 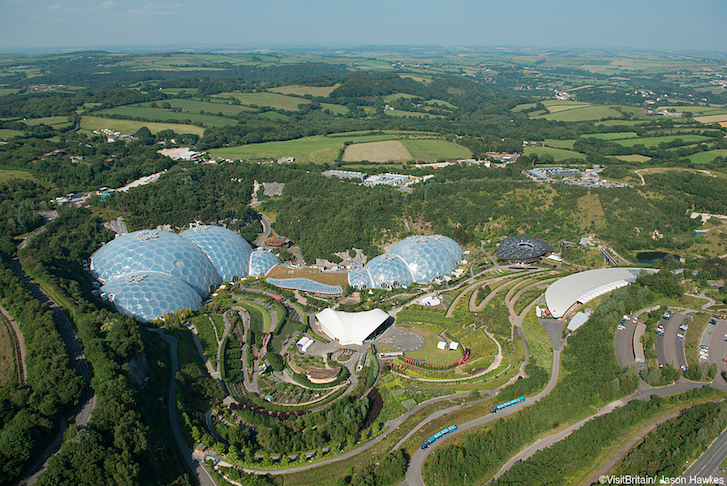 On the Southeast coast of Cornwall, a huge crater inside a depleted clay pit has been transformed into the Eden Project. Visitors discover a thriving garden featuring massive Biomes housing the world’s largest rainforest within walls including stunning plants, contemporary gardens and exhibitions. In 2022, it will even get its own hotel on site, a 109-bedroom designer hotel that maximizes accessibility, energy-efficiency and sustainability. 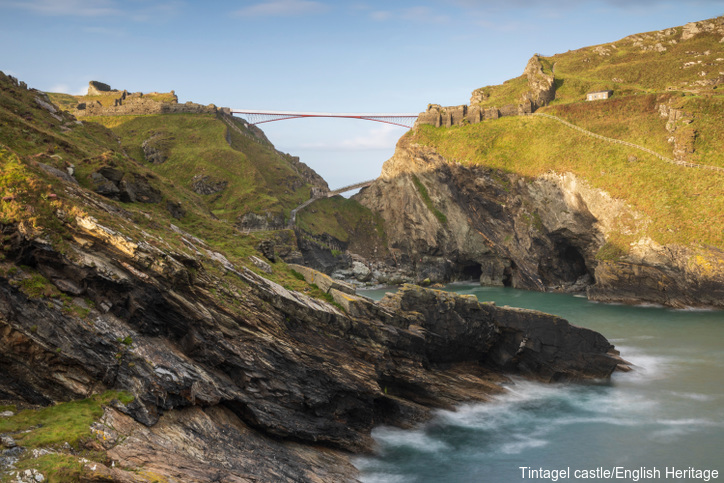 Cornwall’s Tintagel Castle is inextricably linked with the ultimate English tale: the legend of King Arthur. Situated along the dramatic and windswept coastline, the castle ruins echo with stories from centuries ago. Built half on the mainland and half on a jagged headland projecting into the Cornish sea, the startlingly contemporary Tintagel Bridge brings the two impressive sites together in a dramatic way.

Cornwall’s Isles of Scilly are called England’s own tropical islands, accessible by a 15 minute flight or a ferry ride to what might seem like another world. Only 5 of the 140 islands lying less than 30 miles (45 km) off of Land’s End are inhabited, providing the ultimate in privacy and seclusion to explore crystal clear waters and idyllic beaches.
Those in the know have already discovered the charms of the Isles of Scilly. The Duke and Duchess of Cambridge and their children, Kate Winslet, Jude Law and Dame Judi Dench all holiday there.

Cornish pasties, or meat pies, are an historic favorite, but they’re no bygone tradition. Visit Britain tells us more than 120 million Cornish pasties are made each year! Add decadent Cornish Cream Teas to your travel menu and don’t forget about the seafood! Coastal Cornwall is the perfect place for fresh-from-the-sea fish and chips, not to mention Fal Oysters and Cornish Sardines.
At at the luxury resort Carbis Bay Hotel near St. Ives (yes, the St. Ives of the poem, “As I was walking to St. Ives…”), spa treatments include hot tubs infused with Cornish seaweed. That’s fresh!

Top Photo: St. Michaels Mount, a historic fortified building on a rocky outcrop in the Marazion bay, off the coast of Cornwall. VisitBritain/ Jason Hawkes

Places You Can Tour Wine Country Close to Home

See the World's Tallest Indoor Waterfall at this New Airport